15 Celebrity Routines that Will Leave You Scratching Your Head

Did you know that your daily routine can make a significant difference to how healthy, happy, and productive you are? If you want to be successful, then you have to revise your plans and focus on adjusting your routine with the aim of getting more done and wasting less time in-between the tasks. Below are the top 15 celebrity whose daily routines will motivate you to adjust yours. 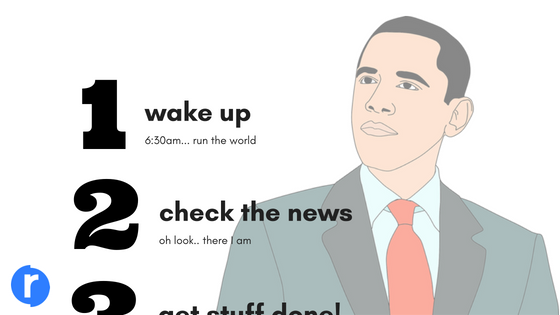 She is the longest-serving queen of the British Monarch. She wakes up at 7:30 AM and takes her breakfast in her room. She then showers and joins her husband Philip for cornflakes. Yes you heard. Cornflakes! No seriously check it out here and here.

She also likes catching up on the racing news in the morning before she starts going through the government documents.

He is the founder of Twitter and also doubles up as the CEO of Square Corporation (Sometimes I feel my 9-5 is a long shot and then I hear this!)

To get things done, Jack has an elaborate 8-hour plan for each company. In short, it means that he is working at least 16 hours in a day which is quite impressive. Think about that. That’s 16 hour a day working.. he will need to travel between companies, commute to work so basically his bed is in the Uber and has mastered show naps.

He says that the only way to achieve this is to be disciplined and organized. He has come up with an idea of theming weeks which helps him to stay focused even when he is interrupted.

Winston had a regular schedule that he always adhered to. He often woke up at 7:30 AM but didn’t get out of bed until 11:00 AM. The extra time he spent in bed was for reading several newspapers and dictating to his secretaries. He always took a bath at 11:00 AM and embarked on his daily routines. 5:00 pm was the time he would take a nap. He re-embarked on his duties until midnight when he retired to bed.

Charles is a renowned writer who authored over 15 epic novels including the Olive Twist and Great Expectations. He always woke up early and was through with eating his breakfast by 8 AM. He then embarked on writing from 9 AM to 2 PM nonstop. He hated distraction, and dedication was the most significant value that he possessed. He could write up to 2,000 words on a single day.

The immediate former President of the United States may not be an early rise but is known to adhere to his daily schedule. He wakes up at 6:30, works out and scans through several newspapers before eating breakfast with his family. He starts his planned daily activities at 9 AM and works into the night, but he would stop working to enjoy dinner with his family every day. His routine is all about simplicity as he focuses on what matters.

According to Leo Babauta, an accomplished and successful entrepreneur, the greatest way of starting your day is by planning what you need to get done. He wakes up as early as 4 AM, drinks water and sets out the top three most important things that he has to complete on that particular day. The most exciting thing about his routine is that he fixes lunch for his kids himself. After eating breakfast and exercising for not less than 30 minutes, he takes a shower before waking up his wife and kids at 6:30 AM.

Just like Leo, Franklin always had a list of what he wanted to accomplish for the day. His day mostly begun at 4:00 AM where he would wake up, take a bath, take breakfast and plan for the day ahead. He would then embark on his official duties between 8:00 AM and 12 PM before heading out of office for lunch while reading a newspaper. His day usually ended at 10.00PM when he retired to bed. He had a regular work schedule and was an early riser.

Running a multi-billion dollar Media Empire isn’t an easy task, and that is why Oprah Winfrey always takes time to focus on herself and boost her dedication every day. She wakes up at 5:00 AM and spends an hour in the gym before heading out for make-up. She starts working at 8:00 AM and by 11:20 AM she has already filmed at least two shows. She takes a short break to call her relatives in Africa before she resumes filming the show up to 2 PM. She goes back to the gym and always reserves some time for her partner in the evening.

The renowned New York-based feminist icon says that she always wakes up in a panic since her life is defined by strict deadlines and events. She typically starts her day off by catching up on the news while getting ready for her office. She then eats breakfast and heads out to numerous appointments and meetings.

Joan Didion is an early riser and principled individual who will always stick to her routine. Although her schedule features numerous activities, the standout hour on her daily routine is the hour just before dinner when she takes time alone to enjoy a drink and go over what she has achieved on that day. According to her, there has to be some clear distinction between work and reflection.

Kim Kardashian wakes up at 6:00 AM and heads out for a light run within her home for an hour. She then works her legs and abs while listening to some R&B music before eating her breakfast. By 9:00 AM, she is in the bathroom cleaning before she sits down to do her make which takes approximately 90 minutes to complete. She then heads out to meetings or to film her show which can go up to 8:00 pm.

The first thing David does whenever he arrives in office at 9:30 AM is to check his email. However, he never checks it before the designated time and won’t even bother about it while at home. He has learned to separate between work and home which brings more happiness to the family.

The famous writer and painter came up with his 11 commandments that greatly helped him stick to his work schedule and daily routine for many years. Being an early riser, he always believed that if you can’t create, you can work. He reported to office as early as 7:00 AM and never left until 10:00 PM.

The first thing that Steve Jobs did whenever he woke up was re-evaluating his desires and work ethics. Known to be a perfectionist, Jobs was always up by 4:00 AM and had light workouts before scanning through technological articles in newspapers. His day at the work would begin at 7:30 AM and sometimes extend up to 9:00 PM.

The only thing that Hemingway thought about was writing. He would wake up at 5:00 AM, clean up. Eat breakfast and start writing at 7:00 AM until what he had to say was perfectly said. He would complete the writing for the day late in the afternoon and immediately start scratching his head for writing ideas for the next day.

Also check these out!